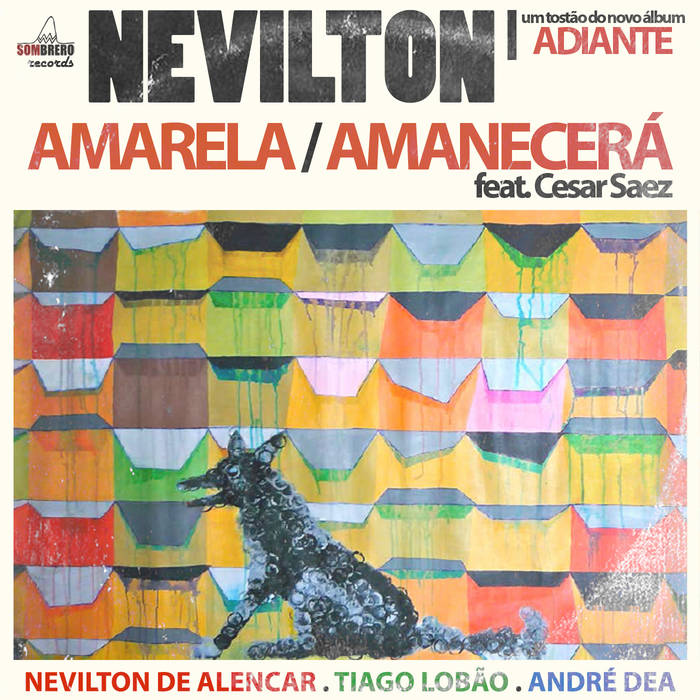 "Amarela / Amanecera" is the first single from Nevilton’s third album "Adiante". It is the first step of a new cycle on the award winning jorney of this brazilian singer and songwriter.

This track, already known by those who have been at Nevilton's recent concerts, is one of the 13 tracks produced during the last 2 years in a very meticulous process. And the Craftmates that helped Nevilton create this very personal new material are: the long time partner and bass player Tiago Lobão and their new soundmate, the drummer André Dea (Sugarkane, ex-Vespas Mandarinas).

The melody, with its long notes, suggests a distant and nostalgic contemplation, which does not pass unscathed by the anxiety that another dawn and the awakening of the city bring to the artist who, surprised by the yellow of the sky, uses the colors and feelings of this moment as fuel in the search of the happiness that can inhabit "the Chorus still unfinished".

During the last years, Nevilton has been increasingly involved with outer-Brazilian Latin music, participating with Spanish and Portuguese-speaking artists in musical projects who celebrate, encourage and strengthen the unity of the entire Latin community of the Americas and beyond. This, along with two Latin Grammy nominations, inspired the artist to release, Amerela with its Spanish version: "Amanecerá", in which he shares vocals with Cesar Saez, who also plays the xylophone.

Cesar Saez is a singer and songwriter born in Mexico, who lives in Los Angeles (CA), where he is a very active musician, having participated in bands like The Bixby Knolls and Wallburds. He is currently working on his solo project, in his name, in which he blends old boleros, french music and rock from the 60's, bringing them to a modern texture. Get to know it in soundcloud.com/cesarsaez

The cover art, inspired in the old jazz records of the 50's, also has its Latin connections, bringing the work "Letters to Lola", by Bernardo Mora, a.k.a Bemgy, a Colombian artist who is now living in Maringá (PR, Brazil). Get to know others of his works at www.instagram.com/bemgy.art/

In "Amarela / Amanecerá" we are presented to the first signs of a more mature and expansive work of this artist who came form the interior of Brazil and now, after touring through almost his whole home country, opens his arms fearless of embracing the whole world and keeping his way, always moving forward.

Brazilian singer-songwriter based in Rome, Italy.

Two Latin Grammy nominations, three albums and some EPs and Compilations you can find all around the web.

In Italy I'm working on my new songs and playing solo sets with loop station and guitar.

I happy you're here, I hope you like my music and share it with your beloved ones! =) ... more

Bandcamp Daily  your guide to the world of Bandcamp

Featuring interviews with the mighty Haitus Kaiyote and genre-busting L'Rain.